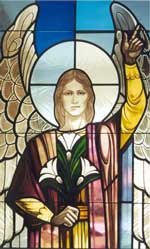 And the cry from the Tillett household this year is… Keep going! Each year brings more discoveries, more to learn, more people to see, more to research. And the more there is to discover, the less time there is to pause for breath...

Chimes Musical Theatre has been raising funds for charity for fifteen years now, and we invite a wide range of wonderful musical friends to take part. Chimes had a busy year, with three variations on the Jubilee theme, in February, May and June, entitled Crowning Glories. (The first of these happened to take place on the day of Princess Margaret’s death…) Then there was Thespis in September (more of that below) and then a wonderful celebration of our fifteenth anniversary, called Bells & Whistles - well, it was in aid of St Mary’s Tower & Bells Fund! – for which we raised nearly £600 (click here for more details and photographs). And finally, as we write, we are rehearsing for a Wassail celebration later this month.

So what about Thespis? For those non-G&S fans among you, it was the first collaboration between those revered gentlemen, and the score doesn’t exist any longer – it was reputedly “used up” between later and more familiar Savoy operas. Selwyn had worked for some time with his colleague Rod Spencer on theories about what exactly the music was, and we performed the resulting show at the Sir Arthur Sullivan Society (SASS) annual conference weekend in Cirencester. This was off-book, choreographed and costume-and-propped, and took over our lives to an obsessive degree – including a four-day weekend rehearsal period for us all, when most of Chimes moved into the Rectory…

We’ve continued to take our “music hall talk” around to various Townswomens’ Guilds and Mothers Union meetings, explaining Selwyn’s family background on the halls; we’ve performed in three of the Monday evening entertainments at Richmond Shakespeare Society, including Melanie Short’s fabulous one-woman show of songs from the shows, The Undress Rehearsal (with the superb sub-title Tits & Ass), and Selwyn’s review of non-Shakespearean royal history plays, Sometimes am I a King.

Selwyn has accompanied other shows, including the SASS Jubilee Performance at Sheffield Park in Sussex, and our friend Leon Berger’s entertainment about George Grossmith. We also enjoyed a joint show at St Mary’s with Leon, presenting not only GG’s music, but also that of the wonderful Flanders & Swann – entitled Top Hats and Dropped Hats. St Mary’s was also treated (if that’s the word) to an evening of poetry and prose in celebration of a Wassail theme – one of our many fund-raising initiatives (more of that later…)

We do like to watch others doing the work, however. Many of our outings in the world of amateur theatre have been at Richmond Shakespeare Society, and many of these have been very impressive. Especially so this year have been Two (two performers playing all the customers in a pub); Julius Caesar at York House; the excellent Flarepath; and the wonderful Art of Coarse Acting, directed by the inventor of that term – Michael Green. We should point out that Michael still makes sure he occasionally plays a spear-bearer in order to keep his upstaging techniques suitably honed…

Our visits to the professional theatre have been varied, to say the least: La Cage aux Folles, Instant Sunshine, Kit & the Widow, Chitty Chitty Bang Bang (our annual outing with Heather); two visits to the Coliseum to see our friend Alison Roddy making great strides in her career with the ENO (Adina in L’elisir d’amore and Rosina in The Barber of Seville); and Follies at the Royal Festival Hall – to name but a few.

Life at St Mary’s church continues as busy as ever – spiritually, socially and financially. Cassie continues in her role as Treasurer (trusting she’s earning a few Brownie points by doing so!); the 2001 accounts were rather a nightmare, but the hope is that many of the problems have been ironed out, as preparation of the 2002 version looms. Having succeeded in reducing our outstanding loan from the Diocese from £103,000 (1997) to £13,000 (2002), we were all set to repay the final instalments during 2003 – only to be told that the church needs complete re-wiring and re-lighting within the next twelve months, at a cost of around £25-£30,000… ho-hum. Back to the fundraising.

Finance apart, we have celebrated many wonderful events at the church, including a confirmation, a Rogation Day walk (treading 6½ miles around the bounds of the parish – great exercise!), two performances of the Fauré Requiem by our excellent choir (one Lent, one All Souls), a concert by the Albinoni String Orchestra; the installation and dedication of our specially designed votive stand; a quiz evening, a tramps’ supper, a Passover meal, a pancake party – and just yesterday we raised over £1,400 with our Christmas Fair. One imagines that the Almighty gets worn out just watching us.

Family history continues to sneak in occasionally. On the Skingley side (Cassie’s mother’s father), we were delighted to welcome Carleen & Michael from New Zealand, and Geoff & Jacqui from France - click here to see more.

However, Cassie has widened the net of her research this year, and we’ve enjoyed meeting Tony & Gay Loades-Carter (descended from her maternal great-grandmother’s brother); and the Nicholson side (her dad) received attention too, resulting in a wonderful get-together. Click here to see more details.

Cassie’s father hadn’t seen Johnny – his father’s youngest brother, but nearly the same age – in about 60 years; and we gathered relatives together from both ends of this tree. Not only that, but we’ve managed to trace the Nicholson branch back to Thomas Nicholson (1732-1806), whose son John was a Cornhill silversmith – and the equivalent of a millionaire in today’s terms when he died in 1841. None of the money has filtered down this far, needless to say…

Cassie has now reduced her working days at Epsom & Ewell Borough Council to just two – the rest of the days being occupied with freelance work, parish treasurership, music, genealogy – etc. etc. The freelancing (under the banner Working Order) continues enjoyable – IT training, office organisation, document design, database design and generally tidying anything that stands still long enough! One of her new ventures has been to run computer classes for beginners at the local infants’ school. No, not the children – they have no problems with computers – but for their parents! The usual cry is “my three year old can use the thing and I can’t…”

Selwyn is still running hard to stand still (like Alice in Wonderland), and of course doesn’t have the option of reducing his working days! However, he has just regretfully concluded his work with Post Ordination Training (POT) – organising, liaising with and advising newly ordained priests and deacons – as it’s clear that 2003 will bring a lot of time-consuming administration as we work towards the new lighting scheme.

Cassie’s flat in Surbiton has just changed tenants again – this is fifth set. Sam & Alex moved out to buy a house before they got married last June; David & Cara have just moved back with her mum to save up for their own house. Now there’s Ross and Catherine - another great couple!

Each year, of course, brings its share of difficult times. We were sad to learn of the death of John Fleetwood, who had married us; he passed away quietly at the age of 92, after 63 years of ministry and 57 of marriage to Joan, and we were glad to celebrate his life with his friends and family at his beautiful funeral in Blackmore, Essex.

We also said goodbye to Brian Parker. A colleague from Richmond Shakespeare Society, he was a fine actor and a fine man, who died of leukaemia after some months of treatment and a determined stiff upper lip. We think that his final performance was in fact the evening of poetry, based on the tale of the life and death of Tristram & Isolde, that Cassie was in with him in late 2001; she’d rehearsed with him whilst he was still in hospital. Very difficult, but a terribly appropriate way to remember him.

Cassie’s father has had a rough time this year. Having recovered from two hip replacements a couple of years ago, Nick was diagnosed with lung cancer a short while back, and two days after the Nicholson gathering mentioned above he went into Barts’ Hospital (only the best!) for an operation. He’s now back at home, recuperating slowly, but we hope and believe that all the cancer has gone and he’ll be back to his old self soon. Cassie’s sister, Jenny, still works hard with her partner Carl in the Pavo bar in Competa, near Malaga in Spain – and Jack and Samantha keep her even busier! Jenny visited the UK with the children during the summer, and Carl managed to turn up and surprise her on the day that Cassie was there – it was a great family reunion.

We’re glad to take time out occasionally! Visits from friends are much welcomed – including the Chimes crew; our friend Beryl from Essex, who ventures to the big city occasionally (she’s known as The Country Mouse to our Town Mice); and Dorothy & Milton, aka the Bolton Bears, who come to share chaos and curry!

And speaking of time out… this has been a particularly wonderful year on the holiday front. We started with a few days in Gloucestershire after last Christmas, taking in some opportunities for Selwyn’s genealogical research on behalf of four very distant American cousins (female…) as we did so, and recuperating after the festive season.

You might already know that we spent what can truly be called the holiday of a lifetime just after Easter: a fortnight in Miami, with our friends / fellow performers / parishioners, Pam & Ian Akhurst, and Pam’s son Rhodri. Ian’s work with Barclay’s Bank took him to Florida for two years, and we were thrilled to be able to visit them. We had a magical time, visiting the Everglades, taking in Mount Dora (near Orlando) to see Selwyn’s long-standing friends, Warner and Lois Brown (a magical visit – including meeting Warner’s lovely sister Char), and seeing many superb sights in and around Miami itself. We were also fortunate enough to see two magnificent entertainments there: a “young musicians” concert at St Thomas’ Church, and The Marriage of Figaro. There isn’t space here to relate the whole story – though as you’re reading this on-line, it’s on the Travel section of the website! Suffice to say that we are determined to see more of the amazing US of A some time, and can’t ever thank the Akhursts enough for their generous hospitality.

Our summer break was a return to the beautiful cottage belonging to Sue & Graeme Parfitt, in the depths of Normandy, which we’d first visited two years before. We relished a beautiful and peaceful time, visiting Chartres, Bec Hellouin, Bayeux (on our way down) and many others, in between “days in” – catching up on reading, tidying the beautiful garden, playing Scrabble or Othello – or a great game called Uisge, which we’ve yet to track down in this country! Wonderful.

So there you have it for another year. More happy memories, and yet another try at “we really must try to take it a bit easier next year”... fat chance. It reminds us of the old bit of doggerel: My candle burns at both ends / It will not last the night; / But ah, my foes, and oh, my friends / It gives a lovely light!

With all our love and hopes for a peaceful, happy and fulfilling 2003.